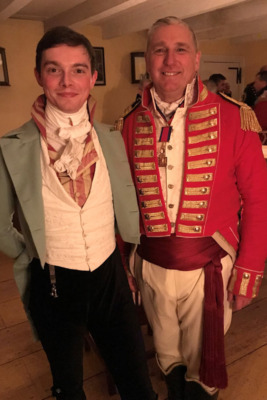 It is great to have a hobby.  It gives you the opportunity to disconnect from your working life as well as opening up the possibility of creating new avenues of learning and inspiration.  I am rather involved in the world of War of 1812 re-enacting.  For myself, it has proven to be the ultimate escape and form of decompression from the pressures of work.  It has taken me to events across North America and even to Europe.  And as chance would have it, the hobby has brought me into contact with interesting people who offer lessons and insights that can be applied to the world of business.

I would like to highlight two individuals who use social media extensively to build their brand and market their endeavours.

How do you turn an interest and passion for Georgian and Regency clothing into a burgeoning global business?  A commitment to your ideals and vision and then building a massive following on social media of course!  Add in a news piece on BBC that went viral (click here to see video) and then knowledge of Zack is everywhere.

Zack does not own any modern clothing.  He lives in clothing (much of which he has made for himself) from the early 19th Century.  He has turned this passion into a business that does tailoring of historic garments.  Zack builds and promotes his business through social media.

I recently had the opportunity to meet Zack and then transport him from one event to another.  What a fascinating individual!  I also discovered that he has become a social media influencer with a massive global following.  Zack believes in regular postings through a variety of mediums.  I was amazed to see him waiting for what he feels is his optimal time for a daily post.  He had calculated that time to have the maximum reach and exposure.

Ponder that for a moment.  Someone who tailors 19th Century clothing and is a major social media influencer!

To learn more about Zack’s business check out his webpage here.

I met John at a history conference in London, Ontario.  John had attended as a guest of the organizing committee and was busy interviewing presenters and attendees for content for his social media efforts.

I discovered that John had left his civilian position as an archivist for the U.S. Army Corps of Engineers and was trying to create a personal brand and a living by exploring his passion for history.  He has done this primarily through leveraging social media.

It is fascinating to hear John talk about the resistance that he has encountered from “traditional” historians who feel that a tattooed individual in casual clothes communicating through social media cannot be taken seriously as a historian.

What has happened has been John turning new audiences and younger audiences onto exploring aspects of history and historic sites.  Should that not be a goal of all historians?  That is exposing as many people as possible to the research and content that they so laboriously created?

I am really excited to announce that John has been accepted this year as a doctoral candidate at the University of Western Ontario.  While pursuing his studies, John will be exploring Canadian sites, museums and history and sharing his impressions and learnings with his extensive audience.